A baby with the last name of Moses.

Will Moses to be exact.

Â She was born in Greenwich, NY.Â  When she was 12 years old, she went to work as a servant for a neighboring farm and did so for 14 years. Then she met a man named Thomas Moses…..and she married him when she was 27. This was late in life to be married in that day.Â

Thomas had heard there were good opportunities in the Carolina’s (HEY…that’s cool…that’s where I am) and he andÂ  Anna headed that way.
On the way down, they stopped to visit friends in Virginia and their friends talked them into staying there. So, they did.
They worked as tenant farmers and they even bought their own farm.
With such a late start to marriage she was only able to eek out TEN CHILDBIRTHS!!!!! Five of the babies died in childhood and were buried in Virginia.

Grandma Moses reminds me of what “DIY’ers” are all about……

Because she did what she had to do to survive.

She was a servant.
Got married later and became a mother.
Became a farmer and it is reported that she churned butter and sold it to bring in additional income
BUT
It is also told that she even sold POTATO CHIPS to bring in income.

HOW CREATIVE IS IT IN THAT DAY TO COME UP WITH THE IDEA OF SELLING POTATO CHIPS?! Just like you modern day ETSY girls! But tater chip style!

In 1905, Thomas and Anna’s farmhouse burned down. Grandma Moses was 45 years old at this time. What a heartbreak. She, Thomas and their five surviving children decided to move back to Thomas’s native area…..Hoosick, NY.
There are records where Anna spoke of her sadness of leaving her five deceased children behind them in Virginia.

I want you to see something in just this part of the story.

~She was 27 before she was ever married. THAT WAS A HUGE DEAL IN HER DAY! She could have felt despondent…..self pity…..and exuded that, so that no one would have even have been attracted to her.
~She was a servant since the age of 12 to 27. She could have been bitter…..felt sorry for herself……and exuded that.
~Her husband wanted her to leave her home and go south…….HELLO….THAT’S A BIGGY! You know where I’m going with this.
~Times were tough in Virgina. They were tenant farmers at times. This is one of the “poorest” stations. You work but have nothing to show for it. They had to use extra means…like making butter…selling potato chips etc. to get to where they could purchase a farm of their own. WHILE HAVING TEN BABIES MIND YOU! That is almost nearly impossible but they did it!
~Once they did get that far….their farm burned down! They had worked sooo hard. Do I need to explain that despair.
~Her husband wanted to move again…and she had to leave her five deceased children and feel like at age 45…they were once again starting from scratch.

So, why haven’t I given you what the card said yet?

Because sometimes……we….as in me…..get so caught up in “values” or “transformations” that we forget the history…….

That is the value.

The card will be nothing compared to what this story is going to bring…..

It is so you and me.

It is so what we need to hear.

I am going to do a couple of posts about it AND then, get to the card.

I want to see which one is a bigger deal to all of us when I’m done.

Could I lose readers that want to just see before and afters??

But that is exactly what I am talking about.

Does it have to do with the value of the picture……not a thing.….so don’t get all excited and green eyed..it’s cool…..but it isn’t that exciting.

But her story is so exciting……and the story after…..

It epitomes all of us.

But meet Grandma Moses with me first.

You will love just her story alone…… 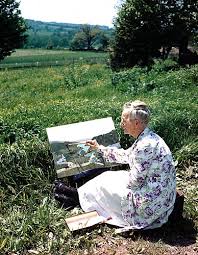 So….do you see the value in learning more about this piece than just it’s dollar worth?

Will you follow along with me….share these posts and trust me?

Because, I’ve got something neat to tell you.

ps…when this series of post are completed I will reference all of the biographies and info that I am using as references.
pps……I would love if stories like this became the highest read stories. I believe it is a story all DIY’ers should read……she is “us”.

0 thoughts on “A story about a baby named Moses…..part 1”